Originally Published on news.bbc.co.uk | A year after Nepal’s royal coup, the international community is looking increasingly helpless in its attempts to help find a solution to the country’s political crisis.

However, these activities seem to have produced no results as the three players in the power struggle – the Maoist insurgents, political parties and the king – all look equally determined to hold on to their positions.

The key international players trying to intervene in the crisis have been the United States, Britain and regional giant India.

The European Union and the United Nations have also sent special envoys and the UN has opened a human rights office in Kathmandu.

All of them condemned the coup, demanding the restoration of civil and political rights.

The US, Britain, India and a number of other countries even temporarily recalled their ambassadors to Kathmandu. But neighbours China and Pakistan said the change in political scenario was Nepal’s internal affair. 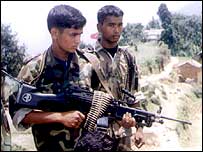 They have also met the king and repeatedly urged him to reach out to political parties, at times with harshly-worded statements.

The Nepalese government, which views such activities as interference in its internal affairs, even summoned the British ambassador to the Foreign Ministry for clarification in June.

However, that has had little effect on the activities and interest of foreigners in Nepal.

The Maoist insurgency in Nepal is arguably the most successful insurgency of its kind in the world in recent decades. It has affected the entire country, pushing it to the verge of becoming a failed state.

This is what worries the international community, especially given the fact that the country lies between two regional giants, China and India, which surrounds Nepal on three sides.

The US has made it clear time and again that it wants to prevent a Maoist takeover in Nepal and the only way to do that is through reconciliation between the constitutional forces in the country.

However, the king looks in no mood to reconcile with the political parties and vice versa.

Similarly, the Maoists have ignored calls to abandon violence.

The American embassy in Kathmandu expressed alarm in early November over the potential alliance between the grouping of seven opposition parties and the Maoist rebels.

What surprises many is the apparent ambivalence of India towards the Maoist insurgency in Nepal
Once again, it urged unity between the political parties and the monarchy.

That did not happen and on 17 November, a 12-point “understanding” between the rebels and the opposition was reached in the Indian capital, Delhi.

Ahead of the deal, senior opposition leader Madhav Kumar Nepal had a series of meetings in Kathmandu with the British, American and Indian ambassadors.

Despite all such efforts, Kathmandu-based diplomats seem to have failed to make any headway in what they want to achieve in Nepal.

However, Nepal’s geo-political location and special relations with India means that Delhi has historically played a crucial role in both resolving and, critics would argue, exacerbating political crises in Nepal.

Many Nepalis tend to believe that more than any other country India’s intentions, which have been repeatedly questioned, are crucial for the direction that Nepal’s politics takes.

At the moment, what surprises many is the apparent ambivalence of India towards the Maoist insurgency in Nepal.

India declared Maoists as terrorists even before Nepal did so. However, it is a well-known fact that top Nepali Maoist leaders spend considerable time in India.

The November meeting between rebel leaders and Nepali opposition leaders took place in the Indian capital with the full knowledge of the press in advance about the planned meeting.

The Indian authorities, however, insist that they were not aware of any such meeting.

Later, rebel leader, Prachanda, acknowledged in his first ever radio interview with the BBC that Indian authorities could not have been unaware of the Delhi talks – but added they were not involved in facilitating the meeting.

The question many raise is, does India really mean it when it says constitutional monarchy and multi-party democracy are the two pillars of stability in Nepal?

Or does India, as one commentator recently said in the Wall Street Journal newspaper, “enjoy the fact of a weak, divided client regime next door”?

Until the international community seeks answers to these questions apart from dealing with the political forces within Nepal, many analysts believe the diplomatic manoeuvring in Kathmandu alone may not be enough to help restore democracy and peace.