The unexpected victory of the Maoist rebels in Nepal’s elections has surprised the former rebels themselves, baffled political observers and stunned the international community.

The general expectation was that the rebels would trail behind the country’s two largest political parties, the Nepali Congress, and the mainstream-left, the Communist Party of Nepal-United Marxist Leninist.

But both the parties were left far behind the Maoists who won half the seats chosen by the first-past-the-post system and gained about 30% of the votes for seats given by proportional representation.

The polls were to form an assembly to re-write the country’s constitution and act as an interim parliament.

The Maoists fought a decade-long brutal insurgency which left 13,000 people dead and caused massive damage to the economy before committing themselves to mainstream politics two years ago.

The challenges they face in the coming days are monumental.

The first and foremost will be to ease King Gyanendra out of the royal palace.

The Maoists and the other main political parties agreed in December that Nepal would become a republic after the April vote.

Maoist leader Prachanda has said he will meet the king himself to persuade him to voluntarily make a “graceful exit”.

Rumours have been rife, especially in the Indian media, that the king is considering taking refuge in India where many Nepali rulers have taken shelter in times of trouble. 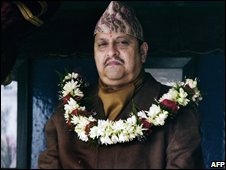 However, a very senior palace source dismissed the rumours as baseless and told me that the king had no intention of leaving the country.

Under the current interim constitution, the king has no role in the affairs of the state and Nepal is regarded as a democratic republic, a provision supposed to be implemented in the first sitting of the Constituent Assembly.

However, a constitutional lawyer, Lalit Bahadur Basnet, says the implementation of the decision will first require amendment in the interim constitution as there are still references to the king.

“You can’t declare a country a republic and have references to the king in the constitution at the same time,” he said.

Some are also of the opinion that if all the provisions of the new constitution require a two-thirds majority for their approval, then the 240-year old monarchy cannot be removed simply on the basis of the December agreement.

The Maoists and many others say the December agreement actually represents the people’s will, hence they overwhelmingly voted for a republican agenda.

Another challenge for the Maoists will be to shed their image of a party that gets its way by using force.

The Maoist leader, Prachanda, has been quick to try to reassure the public, political parties and the international community about his party’s commitment to multi-party and peaceful politics.

Senior leaders of other parties have urged the Maoists to dismantle their radical youth organisation, the Young Communist League, blamed for many incidents of intimidation and extortion, before the former rebels can expect any co-operation.

Privately, many politicians worry that if they co-operate, the former rebels in the new assembly will only be able to further consolidate their grip on power, sidelining other political parties for many years to come.

Some are saying that if they had foreseen the current scenario, they would have never severed their traditional link with the monarchy.

Others are lamenting that the mainstream political parties, who fought repeatedly for democracy, ironically became instrumental this time around in taking back the power from the far right, only to hand it over to the far left.

Such concerns may well be translated into a strategy of non-co-operation during the process of drafting the new constitution.

As every constitutional provision requires a two-thirds majority for its approval, it is likely that the major parties may not easily co-operate with the Maoists in an attempt to undermine their strength.

The Maoists’ planned integration of the former fighters into the national army will be an equally difficult task.

The army has said they will have no problem in working under a “legitimate” government.

But it has repeatedly made it clear that politically indoctrinated former rebel fighters cannot be part of the professional national army.

There is considerable bad blood between the two sides and, on occasions, the Maoist leader has used derogatory language against the army chief.

Apart from these challenges, the former rebels will have to deliver peace, stability and “economic revolution”, all of which have remained their mantra for several years.

To make matters worse, the Maoist leadership will have to deal immediately with soaring price rises of food, fuel and construction material in the country.

If they fail to deliver, they know the public euphoria will not last long.

But many worry that the power struggle between the Maoists and non-Maoists is likely to drag the muddled political process in Nepal for many years to come, leaving the people where they are.